I grew up in Salem, NH. My father was disabled, a veteran, and almost 100% deaf. He struggled with his mental health and holding a job was difficult.  My family didn’t have a lot of money growing up. My mother worked tirelessly to provide for us and never made us feel as though we were wanting for anything, even when we were. Family, hard work and community. These are the things that have defined me as a person more than anything else and are the things that make New Hampshire a special place.

My family didn’t have a lot of money growing up. My mother worked tirelessly to provide for us and never made us feel as though we were wanting for anything, even when we were. She had a lot of different jobs from plucking turkeys at a local farm to working at the food service at Rockingham Park Race Track.

With my father’s disability and my family’s low income, I moved around the Salem area a lot as a child. In 3rd grade alone, I attended three different schools. This was difficult on me and my sisters, but it also gave me the opportunity to experience my greater community in a way that others never would. When I first ran for public office, we often joked that I knew everyone in town, because I probably went to school with them at one point or another.

As a teenager, I started a lawn care business out of the back of my mother’s old Malibu. My neighbors and other members of the community that I didn’t even know, would hire me to cut their grass and clean up their yard. When I wanted to play hockey in high school, I took a job cleaning our church to pay for ice time.

I graduated from Salem High School in 1978 where I was captain of the soccer team. After high school, I enrolled at Merrimack College. Unlike most of my classmates, my financial situation required me to work full-time to go to school. After the first semester, it became necessary for me to take a break from my studies to earn money to continue college. When I finished my last class that semester, I made a promise to myself that this was temporary and that I would finish my degree when I could.
‍
I joined the management training program at K-Mart for the next three years. At 18 years old, I was the youngest of the full-time employees, but I worked hard and moved up quickly. Soon I was being promoted and moved throughout the region to manage various stores.

After a few years, I finally made the decision to make good on the promise I made to myself and returned to college to pursue a degree at what was then Plymouth State College. It was a tough road — not the studies, I excelled in my business classes as one of the only students with real world business experience — but rather paying my way through college at the same time. Each weekend, I would come home to Salem where I worked night shifts at the local Market Basket to make $54 per week. I would return to Plymouth during the week for my classes.

I graduated with a bachelor’s degree in business and took a job at Delahunty Nursery. A few years later, I was promoted to Vice President of the company.

I first met my wife Susan when we were still in high school. We married a few years after we both graduated from Plymouth State College and five years later our daughter Emma was born.

I’ve been lucky to be surrounded by strong women my entire life. My mother, sisters, wife, and daughter have each taught me endless lessons. They have been a true blessing. 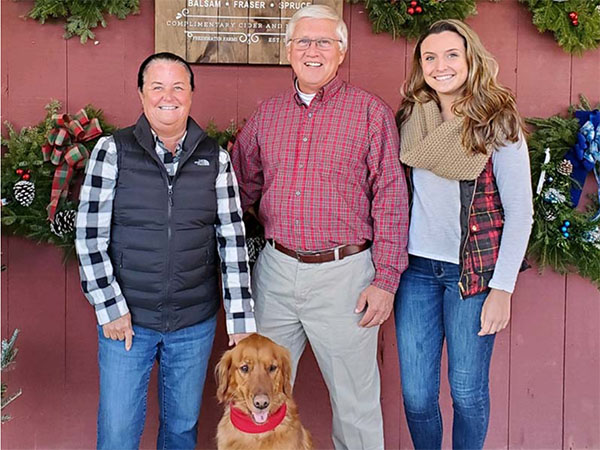 In 1988, I started Freshwater Farms in Atkinson. It was 3 acres, a lot of debt and a dream. Susan and I lived off a lot of coupons to put food on the table. After some good years and plenty of bad ones, our business grew and we now own over 13 acres employing more than 50 Granite Staters.

Several local Salem community leaders became role models and mentors and got me involved with helping our community. With their encouragement, I ran for Salem Selectman and won. I ran for Town Moderator and won. Then I ran for State Representative and served for two terms from 1998-2002.

I was elected to the State Senate in 2002 and was appointed to the Finance Committee. My experience running a business, meeting a payroll, and keeping a conservative budget helped prepare me for the challenges of crafting a balanced state budget. I quickly became known as one of the state’s leaders in budgeting and tax policy.

I took a step back from politics in 2006. My daughter was starting her junior year in high school and Susan and I spent most of the next few years traveling to her field hockey and basketball games. We were her biggest fans.

In 2010, I was reelected to the Senate.  When I returned to the Finance Committee, I found the financial mess that the Democrats had put our state in. The state had an $800 million deficit. We quickly turned that around and put the state’s finances back on a sustainable path.

For my work, colleagues gave me the greatest honor of my life — electing me the Senate President in 2013.

In 2020, I led Republican efforts to retake the majority in the State Senate. New Hampshire was the only state in the country that was able to flip a blue state legislature to red and it was largely due to our strong fight against the Democrats’ proposed state income tax.

Last year, we passed one of the most conservative and fiscally responsible budgets that New Hampshire has ever seen. It is balanced, cuts taxes for small businesses, provides more than $300 million in property tax relief, bans late-term abortions, and prohibits the use of discriminatory teaching in our schools. It puts New Hampshire on a path to long-term prosperity.

The work ethic, commitment to family and sense of community that I learned at a young age have stuck with me as an adult and drive everything I do. I still wake up at 4am every morning to work at our business before going to Concord to do the people’s business. More often than not, I still take my first phone calls of the day while driving a tractor.

I believe that I am a product of all the best parts of New Hampshire — the spirit of freedom, sense of volunteerism and responsibility of giving back to the community that has helped shape me into the person I am today.

I want to bring New Hampshire to Washington and makes sure our voices are heard.

I want to bring New Hampshire values to a place that needs them now more than ever.

I want to work for you and I hope you will consider electing me to represent you in the U.S. Senate.
‍